The East of England is officially the hardiest part of the UK when it comes to bearing the cold, turning their boilers on eight days after the average Brit (14th October), according to new reaesrach1. People up in Scotland are the most trigger happy when it comes to turning on the heat, 11 days before the ‘Big Switch On’ – which has been identified as 8th October.

E.ON found that 26% of the UK delay switching their heating on as they prefer a cooler temperature overall, followed by a 52% majority of Brits who admitted that they avoid switching on the heating to save money. Scottish residents were also found to be the most environmentally minded, with 30% saying that they postponed heating their homes in an effort to reduce their carbon footprint.

The research also found that Brits have some interesting methods to keep warm in their attempt to delay turning on the heat, with over half of Londoners (54%) likely to cuddle someone, while 20% of Yorkshire residents are likely to be seen going to a friend’s home to take advantage of their heating.

Findings show that by 1st December 70% of UK homes will have had their boiler turned on. However, some Brits admitted to keeping their heating on all year round, with a quarter (25%) of North Easterners admitting to being the main culprits.

Research also reveals that we’re a nation of secret heaters – with over half (51%) switching their boiler on without letting on to their housemates or family. Findings show that men are the most likely culprits, with 53% admitting to being a secret heater. What’s more, millennials aged 16-34 are the most likely age group to sneakily switch on the heat, with 61% having done so, with the top reason being to avoid arguments in the home.

E.ON, which recently announced it is providing electricity backed by 100% renewable sources for all its customers’ homes, offers a range of energy-efficient and smart home solutions, including energy-efficient boilers. To find out which boiler is best for your home, plus Interest-Free Credit options, visit: eonenergy.com/boilers 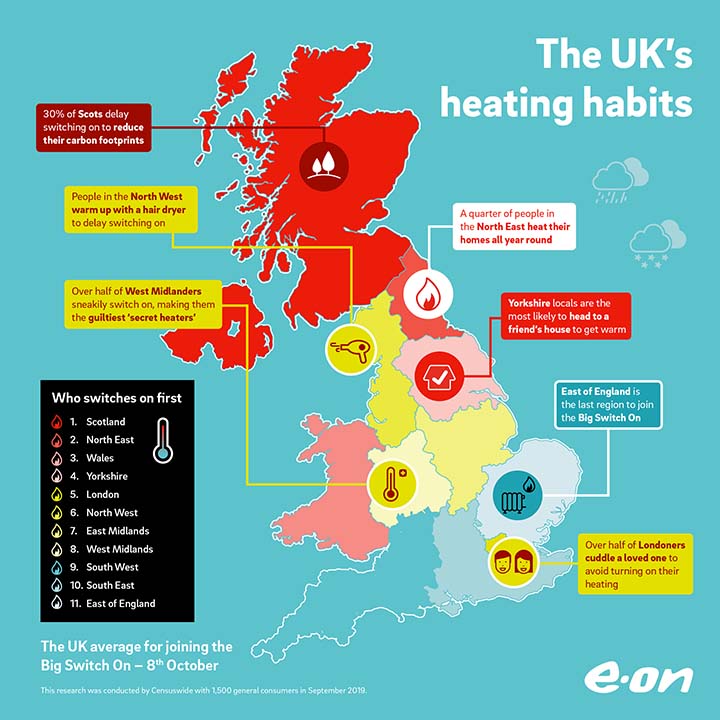