E.ON and RWE Renewables have announced a new 2.5-year agreement on purchasing the output of more than 20 British wind farms, supplying sustainable power to the grid and supporting E.ON’s commitment to provide 100% renewable power for its UK customers.

With this power purchase agreement (PPA) E.ON buys around 3TWh of power annually from wind farms around Great Britain which are operated by RWE. It covers a capacity of 892MW of onshore and offshore wind generation and includes a proportion of the London Array, currently the world’s second largest offshore wind farm.

Earlier this year E.ON announced it was providing all of its residential customers across Britain with an electricity supply backed by 100% renewable sources – on all tariffs, as standard, and at no extra cost. 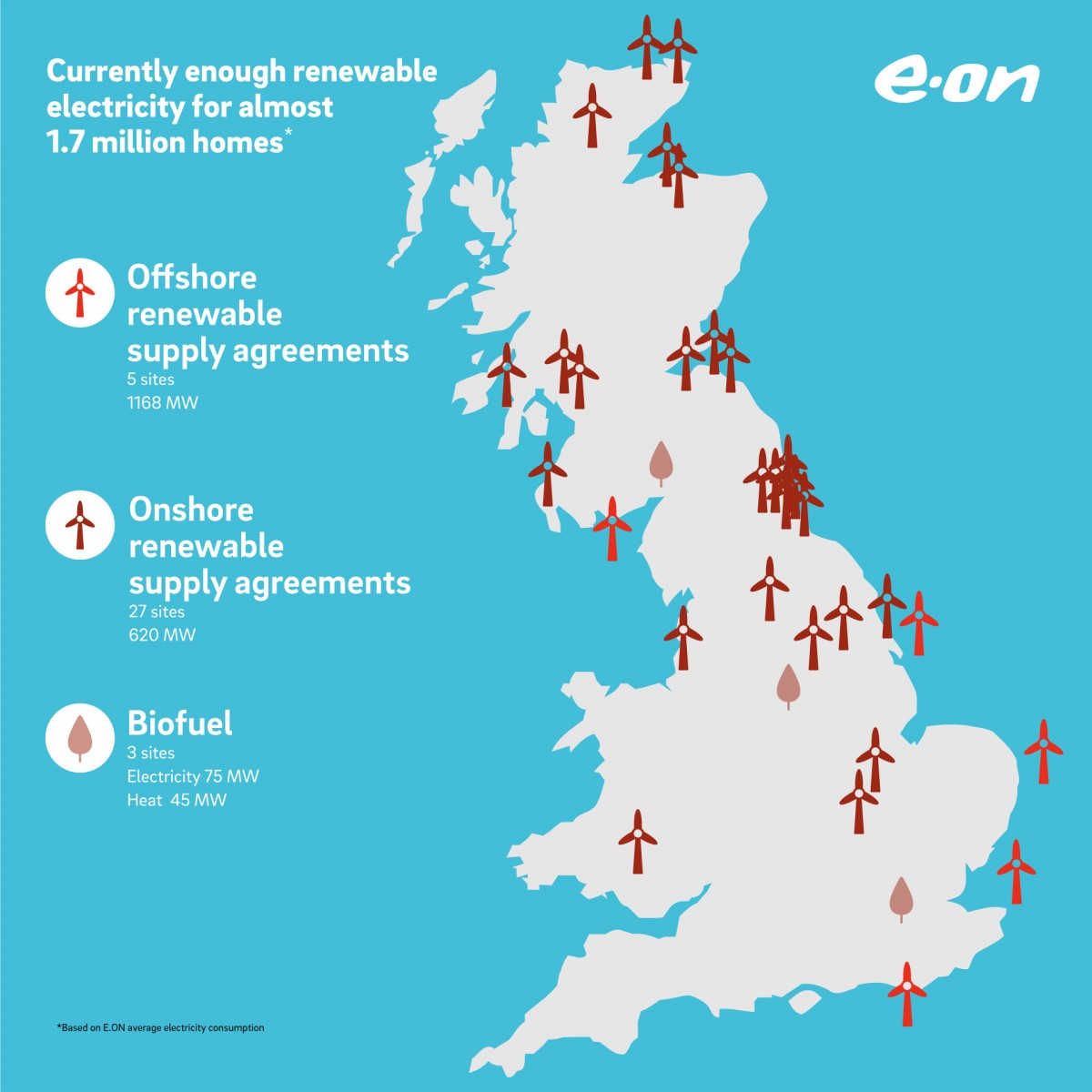 The wind farms were originally built by E.ON as part of the company’s £3.3bn investment in UK renewables over the last decade. Ownership transferred to RWE at the start of October as part of the asset swap deal in which E.ON Group took over RWE’s stake in Innogy in return for E.ON’s major renewable energy activities, amongst other things.

Michael Lewis, E.ON UK Chief Executive, said: “A significant element of our commitment to providing all our residential customers with renewable electricity – a change at a scale never seen before in Britain – was the fact we have invested more than £3.3bn in renewable energy in the UK in recent years.

“We have now secured the power coming from all those wind farms, as well as similar arrangements we have with more than a dozen independent generators around the country, which means our customers can continue to enjoy an electricity supply backed by UK renewables. But the future of energy doesn’t stop here – to combat the climate emergency we are now focusing on helping our customers to better manage their energy through smart, personalised and sustainable technologies such as solar and battery technology, heat pumps and electric vehicle chargers.”

RWE Renewables, the newest subsidiary of RWE has an installed capacity of more than 9GW. Added to this are further assets with a combined capacity of 2.6GW under construction that will be completed in the near future. RWE Renewables is actively seeking corporate PPAs for this capacity.

Tom Glover, Chief Commercial Officer RWE Renewables, said: “Great Britain, where we already operate over 2,000MW of renewable energy plants, is a very attractive market for RWE due to its well-functioning framework. PPAs as are an extremely important instrument that help to achieve renewable build-out targets and offer stability for all parties involved.”

Growing renewable energy is the clear focus of RWE. The world’s No. 2 in offshore wind and Europe’s No. 3 in renewable energy electricity – these positions intends the company to consolidate and strengthen. RWE will provide an annual 1.5 billion euros in net capital expenditure. The company has also set out its goal to become a carbon neutral company within the next 20 years.

Power Purchase Agreements (PPAs) are widely regarded as one of the most viable methods for companies and energy suppliers to secure long-term price certainty and meet challenging sustainability targets in a cost-effective way.

E.ON’s announcement in July, moving more than 3.3 million homes to an electricity supply matched by renewable sources including wind, biomass and solar, is the largest of its type to date in the UK, significantly increasing the number of households in the country backed by 100% renewable electricity.