1.8 million workers earning the National Living Wage (NLW) will receive an additional £690 over the year from today (Monday 1 April), as the biggest ever increase to NLW comes into effect.

The National Minimum Wage (NMW) is also increasing. This includes £7.70 per hour for 21 to 24-year olds, providing an additional £580 over the year for full-time workers, and £6.15 for 18 to 20-year olds, providing full-time workers with an additional £455 over the year. Taken together with changes to NLW, 2.1 million people will be receiving a pay increase from today, with workers in the retail and hospitality sectors due to benefit the most.

We are committed to making sure that UK workers get a fair day’s pay and the rise in the National Living and Minimum Wage, benefiting millions of people, delivers on this commitment.

Since the National Living Wage was announced in 2015, it has helped protect the lowest paid – increasing faster than inflation and average earnings. Our minimum wage rates are among the highest in the world and, through our modern Industrial Strategy, we are determined to end low pay and workers get a fair day’s pay for a fair day’s work.

This government is dedicated to increasing the wages of the lowest paid which is why we introduced the National Living Wage and have continued to increase the National Minimum Wage rates – all of which will rise again today and benefit millions of workers.

This government is committed to raising productivity performance across the income spectrum, so that the wages of the lowest paid can increase sustainably over time. While the proportion of low paid jobs is now at its lowest level for 20 years, we are going further by asking Professor Arindrajit Dube, a world-leading expert in the field, to undertake a review of the international evidence of minimum wages on productivity and employment.

We are pleased that millions of workers across the country will see an above-inflation pay rise as a result of today’s minimum wage increases, which follow the recommendations the LPC made in the autumn.

Today is particularly significant as it also marks 20 years of the National Minimum Wage. Over the last 20 years the NMW and more recently the NLW have achieved their goal of raising pay without significant negative effects on employment.

The UK’s minimum wage is currently growing faster than other countries with similar or higher minimum wage, such as Belgium, France and Germany.

The government aims to end low pay and later this year will announce the independent Low Pay Commission’s remit after 2020. At Spring Statement, ministers also announced that the world-leading academic Professor Arindrajit Dube will lead a review of the impact of minimum wages internationally.

Wage increases follow hot on the heels of the biggest increase to workers’ rights in a generation, launched in 2018, and are a vital aspect of the modern Industrial Strategy.

As part of this, on 6 April all workers, including casual and zero-hour workers, will have the right to receive a payslip and the maximum employment tribunal fines for employers will quadruple from £5,000 to £20,000.

1. Since 2015, the UK’s minimum wage has grown faster than those of most countries with similar or higher minimum wages. These countries are not generally expected to see their minimum wages increase as fast as in the UK over the next few years, with the exception of New Zealand. 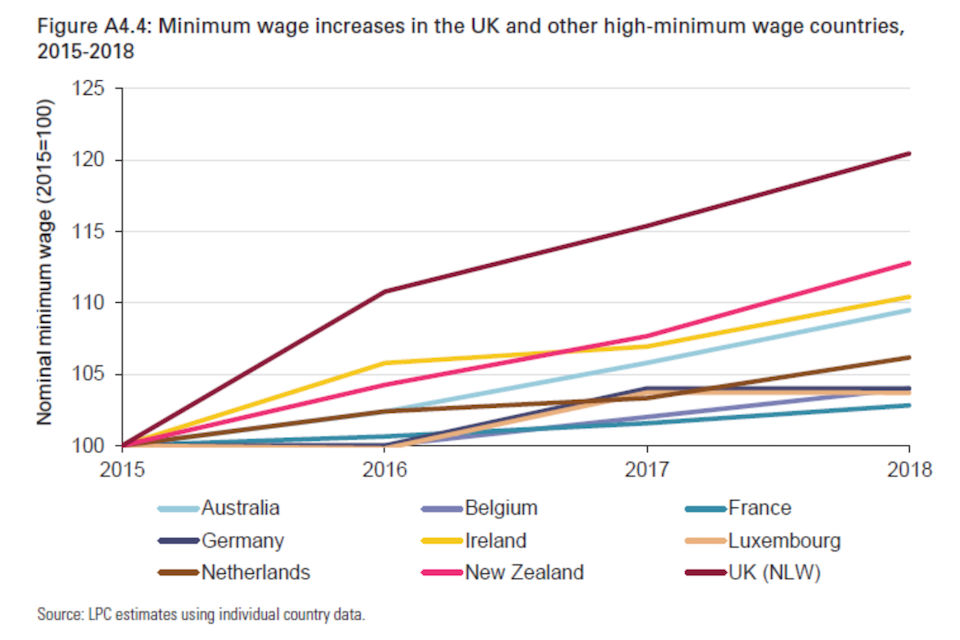 2. The government is committed to ensure the NLW reaches 60% of median earnings by 2020, subject to economic growth. The latest NLW rate of £8.21 represents 59.8% of median earnings, putting the UK on track to reach its ambitious target.

3. Since 2010 NMW / NLW rates have risen faster than inflation and average earnings. The new rates are:

5. NMW / NLW increase to full-time workers’ yearly earnings has been calculated on the basis of 52 weeks per year and 35 hours of work per week, rounded to the nearest 5

6. Protecting and enhancing worker rights after the UK withdrawal from the European Union was published on 6 March 2019.

7. The Good Work Plan comes as the latest response to the independent Taylor Review of impact modern working practices (2017).

The review found that the strength of the UK’s labour market is built on flexibility but that a clearer focus was needed on quality of work as well as the quantity of jobs.

8. The government’s modern Industrial Strategy published in 2017, sets out how the whole of the UK can build on its strengths, extend them into the future, and capitalise on new opportunities.